Kampong Speu is the capital of Kampong Speu Province in Cambodia. Speu is the Khmer word for starfruit, but Kampong Speu is actually famous for its palm sugar and wine. This province is a natural and cultural resort, which is located at Tang Tonle Village and Ampe Phnom Village, So Por Tep Commune and Svay Kra Van Commune, Chbar Mon District in 48-Kilometer distance from Phnom Penh, then turning left for two more kilometers.

The resort has natural rivers, especially the bigger Preaek Thnot River, which has many big trees growing along it and the mountain foot, a rocking bridge linking from Tang Tonle Village to Ampe Phnom Village. You may also see the old pagoda on a hill, what’s a worshiping place for Cambodian people, who go there during traditional festivals.At Ampe Phnom, tourists can enjoy swimming, walking through the rocking bridge and resting at the collages along the riverbank.

Kampong Speu province is located to the west of Phnom Penh. It borders Kampong Chhnang and Pursat to the North, Phnom Penh to the East, Kampot and Takeo to the South and Koh Kong to the West. The area of the province is 7017 square kilometres.

The topography is variable, from a large area of lowland paddy fields in the east to lowland/upland mosaics and upland forested areas in the West. Cambodia’s highest mountain, the Phnom Aural with 1813m altitude is located in the very North of this province. Kampong Speu is classified as a rural province.

General information about the provincial climate:

Kampong Speu’s economy consists basically of rice and fruit cropping and fishery. It’s also noted by its famous palm sugar and wine. Especially the rural households depend on agriculture and its related sub-sectors. 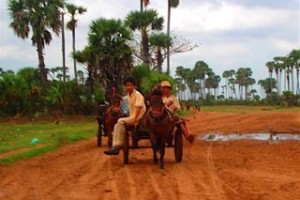 How to Get There

Bus:
As there are several bus companies going from Phnom Penh to Sihanoukville, you’ll have the opportunity to choose freely from one of these. They pass Kampong Speu, so you just have to book a ticket to the provincial capital or you go a bit further depending on where you would like to go too. The most buses are departing from the Southwest corner of the Phsar Thmey (central market). The price shouldn’t be higher than 6000-8000 Riel per ride. The buses depart almost every hour of the day, especially in the morning and midday (no buses after 4pm).
Share Taxi:
Most Share Taxis are leaving Phnom Penh in the morning hours, as there is still business to make, when they approach in Kampong Speu. They leave also from the Charles de Gaulle (Southwest from the central market). The prices are around US 3-4.

On the Ampe Phnom side of the stream site an old pagoda where the Cambodians worship during festivals. Visitor can swim in the stream, traverse the suspenseion bridge or simply relax in one of the many cottages about the stream. Food and beverages are available for sale, and the surrounding woods are full of monkeys.

Ampe Phnom, Kampong Speu is a resort that has Natural River adorned with many big trees growing along its sides. The site is beautiful and presents a picturesque view. The `mountain foot? is a rocking bridge that links from Tang Tonle Village to Ampe Phnom Village. The old pagoda is perched on a hill and is regarded as a place of worship by the Cambodian people. The traditional festivals of Cambodia are celebrated with pomposity in the temple. At Ampe Phnom tourists can spend time by swimming or walking through the rocking bridge. In addition to that you are provided with the opportunity of resting at the collages along the riverbank.

Kampong Speu attracts tourists from all over the world. The city of Cambodia shares its border with Kandal. The province enhances tourism and there are various sites that make your tour to the city unforgettable. The main attraction in Kampong Speu is Ampe Phnom. Enjoy the relaxing lunch on the cottages situated above the stream. Moreover the Ampe Phnom, Kampong Speu provides you opportunity to take pleasure from the panoramic view presented by green environment.

The Amper Phnom is a small mountain which is visited by many tourists round the year. If you want to spend a quiet day in a relaxed mood, then Amper Phnom is the best place. You can picnic with your friends and family members. Take a walk by the side of the river. Amper Phnom is located at a distance of about five kilometers from the town of Kampong Speu.

A nature reserve with a river, walking paths and big shady trees, Ampe Phnom also has a beautiful old wat perched on top of a small hill. Visitors can swim in the Prek Thnoat River, visit the old pagoda or simply relax in one of the many bamboo huts along the river. Whole deep-fried chicken and catfish are a specialty of the area. These can be bought from the many stalls along the river. But beware, as the surrounding woods are full of monkeys so keep an eye on your food and belongings.

Chambok ecotourism site is just next to the Kirirom National Park. Be prepared for some exercise about 4 kilometers trek, interaction with local villagers, and discovery of Cambodia’s unique natural biodiversity, visitors will enjoy with other activities such as hiking, ox-cart riding, renting bicycles, picnicking, bird watching, bathing at the stream and the waterfall, and visiting a bat -cave. Furthermore, visitors can possibly have a lunch in a villager’s house prepared by local women, including fruit and coconut at the waterfall.

The Chambok Community-based Ecotourism site lies at the border of Kirirom National Park in Kompong Speu province. It boasts a beautiful 40-meter high waterfall, which can be reached via a 3 km nature trail. The site serves as a model for best practice in communitybased ecotourism in Cambodia.

The Chambok site is an initiative developed in 2001 by a local environment organization Mlup Baitong, in cooperation with the Ministry of Environment. the aim was to address the issues of deforestation and community livelihoods for villagers in the area, who depend on the forests to produce charcoal to make a living. Through community education programs, they were shown the benefits of protecting the forests for future generations.

Since then, the Chambok ecotourism project was developed to provide an alternative income to the villagers. Managed by the villagers of Chambok commune, all revenues from tourism stay in the community and help them to protect the forest and manage it in a sustainable way. Trained local guides are available to share their knowledge of the nature, history and cultural aspects of the area. The site also has a visitor centre and a restaurant where the local youth stage dance performances and Khmer food is served.

Chambok Eco-tourism Resort, around 70km from Phnom Penh in Kampong Spue province, is just a few kilometres away from Kirirom Hillside resort. But while Kirirom is an upscale luxury retreat, Chambok is successful and sustainable community project. Unlike many similar schemes, Chambok is run with definite and realistic aims in mind conservation that benefits local communities through tourism. Ecotourism is very important for community development, explained Chan Sokha, KCD’s director. Chambok is managed by the community, but benefits from it. The project supports families and the community.

Situated next to Kirirom National Park, Chambok has a lot of attractions and activities to offer to both local and international tourists who are strongly interested in nature. It is well known for its three streams, including the biggest with over 40 meters of beautiful waterfall. Tourists can take guided tours to one of those streams and enjoy the views while hiking through the forest. The English speaking guides will tell a lot about both animals living in the forests and plants growing there. Beside these three waterfalls there is a unique opportunity of experimenting a bat cave and its hundreds of inhabitants.

Tourists will not only find Hotels in Kampong Speu in the centre of the main city of the province, but there are few options of accommodations, that are situated in the suburb. The transportation system of the city is pretty convenient and you can easily reach the destination of your choice irrespective of where you are residing in the centre of the city or in the suburbs. The Hotels of Kampong Speu are of various categories that will suit both, your taste and budget. Most of them are guesthouses used to local clients, as there isn?t such a big influx of tourists.

As it is quite common in Cambodia, every bigger city has at least on big market. You may also find some markets in Kampong Speu town, which are very busy areas with local shops dealing the local daily consumer products, like fish, fruits, vegetables, meats and packed products. All food and drink shops are surrounding the market. To take something special from this province along, buy a bottle of sugar palm wine.