A Christmas homestay experience in Sapa 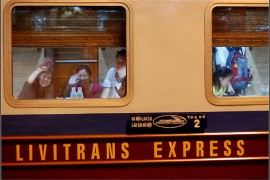 We booked the Livitrans Carriages for our trip to Lao Cai (Sapa) and were quite impressed with them. We paid for 4 tickets so we wouldn’t have to share our cabin with strangers- I’d imagine it would be quite cramped with 4 people + luggage (as I’m sure would be the case for any of the private carriages). The toilets were always quite clean and well maintained. The beds were, well, hard, but we both managed to get some decent sleep during the trip. One thing- on the way to Sapa, the carriages are at the back of the train, so the trip was relatively smooth. But on the return journey, you’re at the front of the train, and at times, you felt as though you were in the spin cycle of a washing machine!

We arrived in Lao Cai via train around 5am and had our pre-arranged guide waiting for us who took us via car to Sapa. We had breakfast at our hotel (Sapa Boutique- review written), a quick early morning exploration around the town (where we had our 1st taste of the determination of the local minorities to sell you something!), before we left on our trek to the village of Ta Van where we were having a home stay. We were able to leave the majority of our luggage at the hotel, and only had a small backpack for our 1 night at the homestay.

Although we weren’t looking for it, the Sapa market was the only time in Vietnam that we saw dog meat being butchered/ for sale.

So, at around 10am in the mist and fog, we set out on our trek which initially followed a main road out of Sapa. We had 4 women from the Black Hmong minority following us at one point until finally it dropped down to one. I suggested to my wife that we give her some money, get a photo and then tell her to go – so gave her 20,000 dong, took a photo…. and then discovered she was going to her village (Lao Chai) – which is where we were also going! We’re still laughing about this! 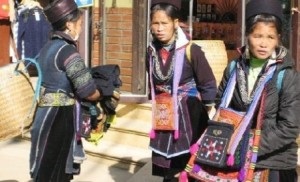 Just before we turn off the road and started trekking through the hills and rice terrace we were again ‘picked up’ by four women and girls in traditional Black Hmong dress who walked with us to Lao Chai. They were most helpful in getting us through some of the ‘trickier’ spots although we probably didn’t really need their help- but they were also good company. The trek went through some beautiful landscape and we were the only ones out there walking at that point. By this stage, the weather had also started to clear, and we found ourselves in the most beautiful scenery, walking with these amazingly dressed minorities- just a fantastic experience!

When we finally got to the Lao Chai where we were to stop for some lunch, we went to buy some of the local wares from our 4 ‘hitch-hikers’- when suddenly we were flooded with others all wanting to sell to us. It was all rather overwhelming and very full-on. But we did manage to buy some embroidered handbags and traditional headscarf’s from the 4 who had been walking with us before we fled to the safety of our lunch cafe.

After lunch, we went on the main path through Lao Chai and on to Ta Van– the destination for our homestay (Red Zhao minority). It was Christmas Eve, but in the foothills, surrounded by this beautiful mountains bathed in sunlight, with mountain streams, rice terraces etc as far as the eye could see, it was almost like we were on another planet!

The homestay was a terrific experience, and the memory of being able to wake up on Christmas day in the middle of no-where with a Red Zhao family was one we’ll always treasure. Homestay is not like a ‘bed and breakfast’- but as such was exactly what we were looking for. They did have hot water, a hand-held shower, and toilets. But we were sharing their house (our beds were upstairs where the grain would normally be stored), and the Vietnamese Minorities (when they’re not trying to sell to you!), were quite shy- although, as I experienced, they did take great delight in laughing at me when i managed to break one of the flimsy plastic chairs while sitting in it!!

During our stay we watched as dinner was traditionally cooked on an open fire (buffalo stir-fry, bbq pork, spring rolls, tofu. Awesome!), had some local ‘fire water’, and at about 8pm, went to bed quite exhausted.

Christmas day, and after a breakfast of pancakes, banana and honey, we left the homestay and continued on with some more trekking- from Ta Van to Giang Tachai via rice paddies and trail – went through the Bamboo Forest and saw the Waterfall. It was very muddy trekking and tough to stay clean but it was really great. We had two Zay women follow us (one from the day before) a fair part of the trek. We visited a number of H’mong houses along the way – some were very poor with the absolute basics for living. One house in particular had children barely dressed, were smeared in dirt and in need of a good bath.

We finished trekking in the village of Giang Tachai – on the way up, we saw a lot of children and gave them some toys, crayons, balloons and lollies we had bought with us – very funny seeing them hold out one hand for a lolly then stick it behind their back and put out their other hand for more.

We then were driven back to Sapa- had a great late lunch at the Gecko Restaurant, after which my wife had a foot massage and a visit to a silver shop (across the street from our hotel) where she bought some jewellery based on Flower H’mong and Red Zay traditional jewellery design!

The following day (Sunday- 26/12) was our last in this part of Vietnam, and on the trip back to Lao Cai we travelled to Bac Ha markets and saw the Flower H’mong women dressed in their traditional outfits. The markets were such a sea of colour and a real highlight of our entire trip- if you have the chance, these markets are a ‘must do’ on any trip to Vietnam.